So, who is Theo Ramakers, and what is a minor planet and why should we care?

So, let us start with why we should care.

Our community, the Parks of Stonecrest and the Terraces of Stonecrest, has many young people in the school-age range of Kindergarten through 12th grade.  Many members of our community want to see these children succeed in school because that success

Some members of our community are working hard to encourage the community’s students to do well in school.  Among the many efforts to support our Students are two  groups.

In 2017 many members of the Atlanta Astronomy Club came to our community to share their passion for astronomy with our young people.

The founder of the Stonecrest Educational Fund, Julian W. Beckford, MD, is a member of the Atlanta Astronomy Club – Charlie Elliott Chapter and a friend of Theo Ramakers. They share a passion for the scientific education of our youth.

In addition to providing summer academic scholarships for our youth (to Georgia Tech; University of Georgia, Athens; the Fernbank Science Center; and the Fernbank Natural History Museum) and freshman college scholarships, the Stonecrest Educational Fund brings scientists with worldwide reputations to our community for the benefit of our children.

SO, WHO IS THEO RAMAKERS

Firstly, he is an astronomer.  More importantly, he cares about youth.  Now, a heavenly body is named for him in perpetuity because he shares his passion with youth.

He is recognized by the Paris, France based International Astronomical Union and by the Harvard/Smithsonian Institution based Center for Astrophysics for his scientific work.

So, what is a minor Planet?  Well, Pluto used to be regarded as a major planet.  It was recently demoted to being a minor planet.  Probably the simplest definition of a minor planet is to say that it is a small planet orbiting the Sun and it is not the satellite of some other planet. There are many minor planets which we can now discover with our advanced technology.  The International Astronomical Union is responsible for naming these heavenly bodies.  It has given the name Ramakers to the Minor Planet (71615).  “It was discovered by the Catalina Sky survey on March 3rd, 2000 (established that it was an orbiting Minor Planet).”    It was first observed on September 26, 1998, and most recently documented on July 8th, 2021.  The name designation was issued by the Minor Planet Center at the Harvard/Smithsonian Center for Astrophysics.

Minor Planet Ramakers orbits the Sun at a safe distance of 123.6 million miles from the Earth’s orbit.

The concerned residents of our community thank Theo Ramarkers for his dedication to the education of our youth.  We commend Harvard, the Smithsonian Institution, and the International Astronomical Union for recognizing the hard work done by this member (and thereby all members) of the Atlanta Astronomy Club toward the educational advancement of our youth. 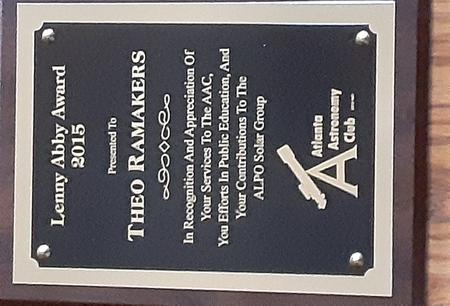 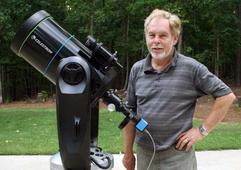 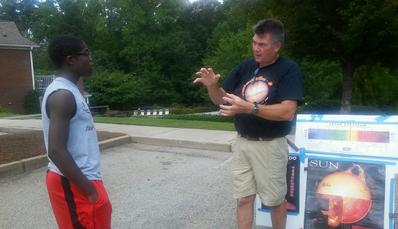 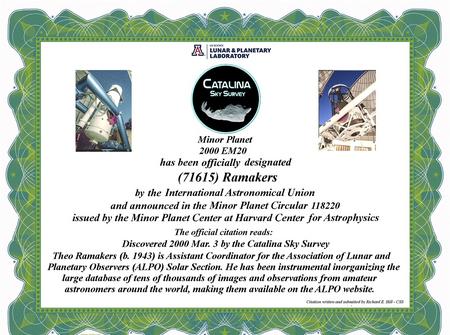 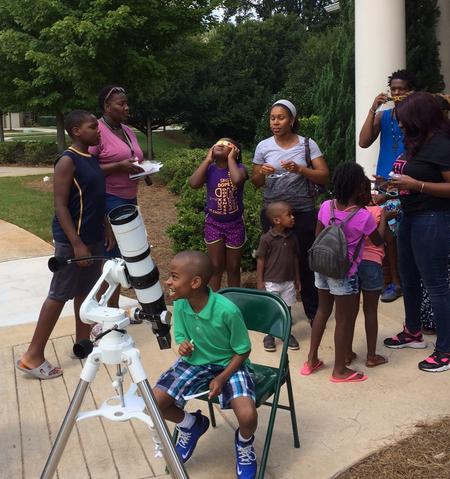